This list is only in release date order not by my rating, but they are the best action films in the naughties.  Please leave any comments or suggestions for movies I may have missed or your opinion of my list choices. This list contains the very best action films from the last decade and really represent the genre well.

Ridley Scott and an excellent cast successfully convey the intensity of Roman gladiatorial combat as well as the political intrigue brewing beneath. Ridley Scott at it again being brilliant as normal with this master piece of film history, with a truly inspirational film of a wronged man destroying an emperor to avenge the death of his son and wife.  “My name is Maximus Decimus Meridius. Commander of the Armies of the North. General of the Felix Legions. Loyal servant to the true Emperor, Marcus Aurelius. Father to a murdered son, husband to a murdered wife – and I will have my vengeance, in this life or the next”. Now that’s a Quote! 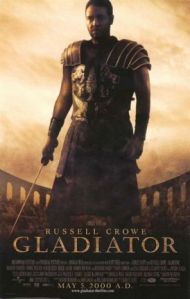 This movie has got everything from politics to gory sword fights and doesn’t hold back on either one, but not exactly historically true and is stated as an historic fantasy film so in my opinion they can whatever they want because I loved this film. The fight choreography was brilliant and matched with spectacular visuals made you feel like the coliseum was back in business, my favorite fight with the undefeated champion and the tigers.

A quickly forgotten chapter in United States military history is relived in this harrowing war drama from director Ridley Scott (Wow he’s taking over this list). On October 3rd, 1993, an elite team of more than 100 Delta Force soldiers and Army Rangers, part of a larger United Nations peacekeeping force, are dropped into civil war-torn Mogadishu, Somalia, in an effort to kidnap two of local crime lord Mohamed Farah Aidid’s top lieutenants. It looks fantastic, not least because it boasts helicopter scenes to rival those of Apocalypse Now (sadly without the music). 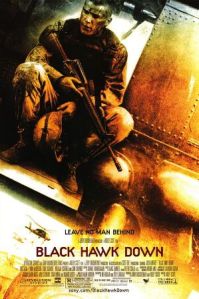 The film is part of an elite group of movies that represent war in its horribly realistic and heart stopping action scenes which makes you scared for the characters. “’Black Hawk Down’ jerks you around, slaps the side of your head, and kicks your butt back up to keep moving on” favorite critics review. My favorite and most gruesome was the soldier with the shrapnel in the leg, oh my war is not for me.

The second film in Peter Jackson’s series of screen adaptations of J.R.R. Tolkien’s internationally popular Lord of The Rings trilogy, The Lord of the Rings: The Two Towers literally begins where The Lord of the Rings: The Fellowship of the Ring ended, with the Fellowship splitting into three groups as they seek to return the Ring to Mordor, the forbidding land where the powerful talisman must be taken to be destroyed. But nobody cares about that bring on the Battle of Helm’s Deep, the walking trees and dwarf tossing yeah!

The Two Towers is the greatest blockbuster ever made without either a beginning or an end, a brilliant adaptation of the books much better than the first and more entertaining than the third so all in all very impressive film. Andy Serkis’s work in creating Gollum deserved an honorary Academy Award. His gestures and voice, not computer software, make Gollum so memorable as he wrestles with his inner homicidal maniac.

Perhaps the most highly anticipated film of 2003, Kill Bill Vol. 1 marked the return of renowned filmmaker Quentin Tarantino after a six-year hiatus. Re-teaming the director with Uma Thurman for the first time since 1994’s Pulp Fiction, and what a return it was with very stylish cinematic scenes and unrelenting gore with a katana (Samurai sword). Brutally bloody and thrillingly callous from start to bloody end.

The Fight scene in the Chinese restaurant is the best of the fights and probably one of the greatest sword fights in a movie. This carnivore of film making reinvigorating cinema a second time over with a single-plot-trajectory revenge movie that utilizes samurai sword action with a shifting score of infectious guitar, which in many ways reminds me of ‘From Dusk Till Dawn’ but replacing swords with guns and sadistic bad guys with Mexican vampires.