Welcome to marvel at its worst, that’s right the 5 worst marvel films and I am positive ‘The Avengers’ will never be on a list of this kind.

Don’t really know where to start with this film but for comedic effect “am the juggernaut, bitch!” so many things wrong with this film but that was particularly bad and funny bad. Director Brett Ratner has replaced the heart and emotion (and character development) of the previous X-Men films with more action and explosions. The explosive X-Men motion picture trilogy officially draws to a close with this release that finds Rush Hour director Brett Ratner stepping in for Bryan Singer to tell the tale of a newly discovered mutant “cure,” and the polarizing effect it has on mutant/man relations. This 6% is purely for the effects used to have magneto move the Golden Gate Bridge.

Director Brett Ratner has replaced the heart and emotion (and character development) of the previous X-Men films with more action and explosions. But that doesn’t make up for numerous errors in plot and character scripts. For a start you killed off Cyclops at the beginning in a very boring way, just didn’t make sense because he is a main character of the franchise. Then they somehow made the phoenix plot boring and at times stupid. Oh and the small detail of killing off Xavier which was really depressing and after that took a couple of nose dives further to really ruin the X-men franchise.  Thank you Matthew Vaughn for saving the X-men universe.

Well it’s the third film again on the worst list and suffers from the same kind of problem which is mainly cramming as much characters into one film as possible without developing them or making much effort to explain their being in the film. All is well in New York City until one night, as Peter and M.J. sit gazing at the stars, a falling comet streams across the sky and crashes into the ground close by. But this isn’t any ordinary shooting star, and upon impact the mysterious space rock is split open to reveal a shape-shifting symbiote with the power to overtake anything that it comes into contact with. Don don don donnnnnn and then they ruined venom. 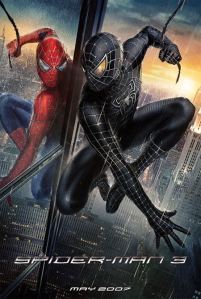 So let’s see spider-man has to fight the sand-man, the hob goblin, venom and his own ego (who thought that was going to work) the film would have to be 6 hours long. My favourite review “Too many villains, too many pale plot strands, too many romantic misunderstandings, too many conversations, too many street crowds looking high into the air and shouting “oooh!” this way, then swiveling and shouting “aaah!” that way.” Roger Ebert. That just sums this film up well, but the scene where parker starts dancing around New York (what the hell was that!). Good news for the venom story though because it’s getting its own movie and maybe directed by Josh Trank (Chronicle).

Never really been a fan of the fantastic four and this film certainly didn’t bring me around. A handful of heroes become superheroes under unlikely circumstances in this action drama adapted from the long-running Marvel comic-book series. Four astronauts are on a mission aboard a new experimental spacecraft when they are unexpectedly exposed to a massive dose of gamma rays. The accident causes strange and unexpected transformations in all four. Fantastic Four is a goofy, mediocre entry in the superhero genre. 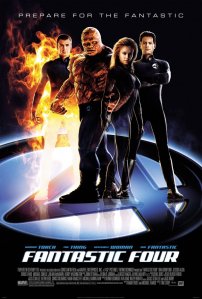 Before the inevitable and surprisingly anticlimactic battle with Doom (doom wasn’t too bad but was seen very little considering his importance), we are treated to two extreme-sports demonstrations (both very stupid), several training montages and an ill-advised love triangle that just seems to end very weird set of plots altogether. Fun for kids but not for anyone else. Script by Michael France (Hulk) so that’s why! Favourite review “Four-play without any climax.” Amber Wilkinson. He may enjoy films too much.

This comic book movie is an inert muddle that takes itself much too seriously. I didn’t even know who Elektra was and after watching the film wish I didn’t know now. Daredevil’s main squeeze gets resurrected in her own flick with this spin-off martial arts actioner from director Rob Bowman (Reign of Fire, The X-Files: Fight the Future). Jennifer Garner returns to the role of Elektra Natchios, a hired assassin whose origins are finally revealed after her old ninja clan the Hand brings her back from the dead to serve their evil purposes. Don’t really know what they were going for on this one. But it was terrible. 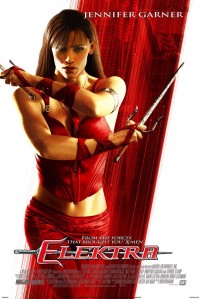 For all its slow-mo kick-flying and computer-generated mysticism, the story is tissue-thin and simple to the poke holes out and is simpleminded from start to end. The villains didn’t make much sense or maybe I just didn’t care enough to notice what they were but it’s too boring. Favourite review “Breathlessly boring spinoff of Daredevil.” Peter Travers. Now that’s really saying something.

This film was very ambitious but ultimately failed. Ang Lee directs the live-action feature film The Hulk, based on the Marvel comic book created by Stan Lee and illustrated by Jack Kirby. Emotionally stunted Dr. Bruce Banner (Eric Bana) is part of a research team at the University of California at Berkeley. Corporate hustler Glenn Talbot (Josh Lucas) takes notice of the lab and makes plans to take it over. Then Bruce accidentally gets hit by an experimental ray and grows into a huge beast.

There’s ultimately way too much talking (sometimes felt like I was watching a weird drama) and not enough smashing (only good scene with smashing would be the helicopter battle and even that didn’t make sense). Why can he jump miles? Why does he grow bigger the angrier he gets? Why does he look more fat than muscular?  Why is he really light green? Why does he look retarded? And what’s with his dad? Can’t remember that from comics. So many things wrong with this film. Worst scene the fight with the mutant dogs was just terrible. Just that scene comes with questions, why did they turn to dust when they died? How did the dogs get on the tree branches?  How did that woman not die?