Just watched this film at the weekend and thought it was well good to ok nothing special, nothing even memorable but it wasn’t bad. It was basically Rock ‘Em Sock ‘Em Robots turned into a movie, but unlike the battleship being converted to a film they didn’t have fun with it, but instead decided to go more serious with a bit of a gritty back story and a bad father son dynamic. A gritty, white-knuckle, action ride set in the near-future where the sport of boxing has gone high-tech, Real Steel stars Hugh Jackman as Charlie Kenton, a washed-up fighter who lost his chance at a title when 2000-pound, 8-foot-tall steel robots took over the ring. Tim’s Film Reviews: wait till it comes out on TV. 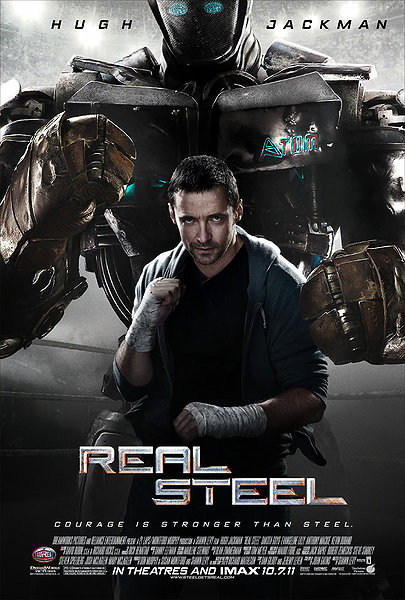 The Film does have some good points in that the visuals looked very good so you can watch it and believe what’s going on. The effects used appear to be a mixture of puppeteer working and CGI which works well for the fighting and the human interactions that needs to take place. The fight scenes have no stamina and last no longer than a minute which makes you feel that either they ran out of money for effects or they have never seen a real boxing match (or for that matter Rocky) because the fights just appeared to be the first robot to punch the head which is just boring without a fight.

The worst part for me would be the first fight between a rusted beaten robot against a bull (seriously just a bull). That just felt stupid and five fights after that were just lost within 30 seconds so it takes a while for any good fortune to happen to any of the main characters. The best part would be the last fight between the robot Adam and Zeus the reigning champion, this fight was more like a boxing match should be between two metal fighters and kept you on the edge of your seat.

My favourite review “Real Steel is constructed from two incompatible movies that should never have co-existed: serious science fiction set in a plausible near-future and a gooey, sentimental family drama.” Richard Edwards. This review certainly describes the main problems of the film in that the science fiction of the film which is actually based of a twilight episode doesn’t really work with a damaged family dynamic which gets a bit mushy for my liking.

I will be releasing more reviews and more recent films I have seen in Cinema.

To see more reviews I would recommend the site Rotten Tomatoes: