Skyfall is probably the best Bond film I have seen in a while and I don’t see any reason for die hard fans to be disappointed. The opening, middle and end to this film are fantastic and action filled, with a surprisingly sentimental look at the previous 50 years of Bond. Daniel Craig does a great job as Bond and Javier Bardem plays a wonderfully creepy villain even if I would have liked to have seen more of him. The story was far more 21st century than any of the other Bond films and is nice to see what direction the next installments of Bond film will be like, respectful of tradition but up to the date, serious in its thrills and some complexity in its characters but with the sense of fun that missing from the recent set of Bonds. In other words best Bond mix for while.

James Bond is back, but his loyalty is tested as M’s past comes back to haunt her. This year marks the 50th anniversary since the infamous spy franchise first started and the producers of the latest Bond film have pulled out all the stops. For the first time in the series’ history, a James Bond film is being directed by an Academy Award winner in the form of Sam Mendes, who won the award for American Beauty in Mendes has bought with him a wealth of talent – in fact, the impressive cast and crew of technical experts have 35 Academy Award nominations and five wins between them. It is no wonder that this is rumoured to be the biggest Bond ever. Filmed all over the world including Turkey and China, ‘Skyfall’ sees MI6 come under attack and Bond (Daniel Craig) dispatched to track down and destroy the threat – no matter how great the personal cost. The stellar cast also includes Javier Bardem as the villainous Silva who, after his scene-stealing performance in ‘No Country For Old Men’, will be more than a match for Craig’s Bond.

Just as always I will not be giving away any spoilers so you don’t have to worry about reading this review before seeing the film. To start off let’s talk about the acting. The acting was very good from the main cast and all supporting cast from James bond to the new Q. The character that is bond is studied far more by this film than anyone of the other Bond films, James is beaten and broken, he has to come back to the people who betrayed him and save them, we also get to see further into the film his past in some light (not going to spoil it). Javier Bardem as the villainous Silva is really fun to watch and is a great addition to the great bond villains, there is a scene with a one to one conversation with Silva and Bond where there is a great sense of understanding and crazy in what Silva does (not a spoiler it’s in the trailer, weird really weird). The new entries into the bond films being Ralph Fiennes as Garath Mallory (there is a spoiler here, I’ll leave it out though), Naomie Harris as Miss Moneypenny (didn’t get this until the end scene, diehard fans will love that scene), and lastly the new Q played by Ben Whishaw (More gadgets, God damn it!).

So let’s talk about something more fun like the visuals. The special effects, physical props and visual landscape shots where both excellent viewing and brilliantly immersive to the world that James Bond lives. The best thing I thought about this film’s visuals was that nothing seemed like it was done through CGI even though common sense suggests it must have been done with some. There were quite a few scenes that were massively explosive and action packed, mostly the opening scene with the train and Bond using that excavators, then the train in the subway (really doesn’t like trains) and lastly the Scotland helicopter scene (can’t go into great detail without spoiling). The chases where great and fast paced from the get go but without losing eye contact like some action films. The gadgets aren’t as numerous as other bond film but it makes up for that with a great villain and lot more humour than the darker boring past couple of films.

The best reviews I found would be these “The Bond cocktail is given another good hard shake, and the result is not just a cracking entry in the franchise but also a fitting tribute to 007 in his fiftieth cinematic year. Cheers!” Film4. True, true and true, totally agree. “Better brace yourself for the best Bond episode in ages, thanks to Daniel Craig’s coming of age to make the role his own.” Kam Williams. He probably should have done that from the beginning but better late than never. “Conveys the melancholy of loss, mortality, and future-shock anxiety, while at the same time leaving us plenty of space to enjoy one of the most complexly unhinged villains in Bond history.” Lisa Schwarzbaum. The villain in this bond is probably the most crazy you’ll see and that’s good. My favourite scene without giving anything away would be the chase around London with James Bond and Silva, very cool and action packed. 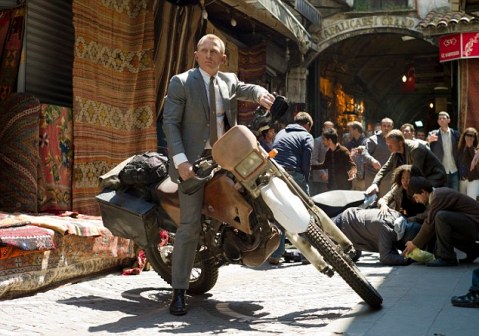 Finally I would like to do SPOILER!!!!!!! Ish things like describing each death in the film. That guy in the chair bleeds out, the people in MI6 die from Silvas explosion, Bond throws guy off skyscraper, those bodyguards/assassins get killed by  komodo dragons(seriously), Silva shoots that bond girl in the head when bond misses, Bond shoots a bunch of his men before those helicopters come (He kicks ass), there’s that shoot out in the court room about eight people die on both sides, Silva’s men attack Bonds old house in Scotland and they all die through traps and getting shot and what have you, he sets up a bomb to take out that helicopter (that was very cool I must say) and then Bond throws a big ass knife into Silva’s back in that church. Think I got the gist of that, probably missed a few but there you go. Please comment below if you remember any I missed off.

Just has to Include this: