The Hobbit: An Unexpected Journey (2012) Review

I liked it, not my favourite middle earth installment but a good addition nevertheless. Jackson has at least two more films to bring out greatness from Tolkien’s work so we’ll just have to hope he maintains the pace or does better. It’s really hard not to nerd out when watching these films, by the way I have read the book and I think Peter Jackson did well so far, still haven’t seen Smaug but that’s the next film (I saw its shadow, tail and eye). Loved the dwarfs, normally they are my favourite characters and continue to be in this installment  I also loved the music and would have given it a perfect score if it had more songs and musical scores, but there are more film for that and you have to view as a platform for what’s to come. In terms of visuals, they were really good, some areas better than others but I will go into that later on. Not sure if this is relevant but I saw the film in IMAX 3D without 48fps, some people hated others didn’t mind but I don’t have any experience with it so I’ll leave that for others to discuss.

The Hobbit: An Unexpected Journey follows title character Bilbo Baggins, who is swept into an epic quest to reclaim the lost Dwarf Kingdom of Erebor, which was long ago conquered by the dragon Smaug. Approached out of the blue by the wizard Gandalf the Grey, Bilbo finds himself joining a company of thirteen dwarves led by the legendary warrior Thorin Oakenshield. Although their goal lies to the East and the wastelands of the Lonely Mountain, first they must escape the goblin tunnels, where Bilbo meets the creature that will change his life forever… Gollum. Here, alone with Gollum, on the shores of an underground lake, the unassuming Bilbo Baggins not only discovers depths ofguile and courage that surprise even him, he also gains possession of Gollum’s “precious” …a simple, gold ring that is tied to the fate of all Middle-earth in ways Bilbo cannot begin to know. 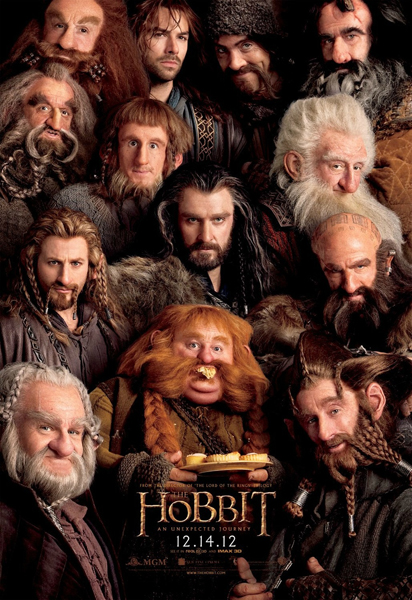 To start off let’s talk about the acting. I really liked the acting in this film and loved most of the new characters and those who returned. The dwarfs are fantastic, fun and well really act like dwarfs, and I just wish we had a little more time with those characters because they are really fascinating. As for the returning cast I am so happy they agreed to come back because if Ian McKellen didn’t come back for Gandalf it wouldn’t have even happened because nobody would except that. I thought Richard Armitage did a fantastic job as Thorin and I really liked the character so I am glad he pulled that off. The only complaint I really have is with the trolls and orcs, I am not sure I liked them being all super CGI. Not sure if it’s me missing the good old days of fantastic prosthetics to make all the bad guys, on that note I didn’t like the three trolls almost felt like they were trying too hard to be funny but it is based off a essentially a children’s book so I’ll let that one go. My favourite of the cast would have to be Richard Armitage because he plays the role of Thorin so well almost like he was born for the role, Tim approves and I can’t wait for the next installment of characters.

I loved hearing that the actors had to walk with weights around their waste to simulate the way dwarfs walk and fight. Dwarfs have balls of brass. Now onto the story, I like the story from the book and it follows it pretty closely, on the rereleased edition anyway. I love the way Jackson showed the dwarf kingdom right at the start and not too far in a couple of battles, first the dragon Smaug attacking and then the dwarfs trying to take a new mountain. As for you violence nuts who may be missing the epic battles saw in the lord of the rings you will be glad to hear that I imagine the battle of the five armies will be in the third film which should be rather epic indeed. I unlike most I can imagine how Jackson will make the hobbit story stretch into three films, and I look forward to his interpretation. The music in this film is very good and really sticks in your head for a while, the only complaint is that there isn’t more of it and I really hope they expand the score of the series with the upcoming films.

So let’s talk about something more fun like the visuals. The Visual Effects in this film were really good and because of the passage of time we now have far great CGI technology and possibilities, Peter Jackson was clearly very excited about this, and forgivable went a little far with some it. My favourite scene using these new visuals would have to be the living mountains fighting each other, wow they looked fantastic and the interaction with the Dwarfs was amazingly detailed so well done Jackson playing with your cool new toys. On the other side I believe he might have gone a little far with the trolls and some of the orcs, just not feeling much love for those visuals maybe I am just getting some old man feelings of it was better in my days (I am only 19, shut up Tim). The dwarfs looked fantastic and because there were so many of them I can imagine it taking an army of make-up artists hours to get done right, and they would have to take that stuff off and put it back on every time they left and came back. I would love to get a copy of the lord of the rings just having all the landscape shots of New Zealand and editing out the people and CGI just to show it like a documentary. Then a separate copy with all the CGI and massive battles that lasts hours.

The best reviews I have found which was difficult this time around would be these “’The Hobbit’ is another ambitious, gorgeous and faithful trip into JRR’s writing – and because of this, it won’t win any new fans if you had no patience ten years ago. For those who do, you’ll definitely want to go there and back again.” Patrick Kolan. I agree that it won’t win anyone new to the fan club but if your already a fan then you will like this film. Also “This first chapter of Peter Jackson’s new Tolkien trilogy takes us back to the familiar settings and characters, inflating a simple journey into an epic adventure in the process.” Rich Cline. It really does take us back to middle earth and that’s all I really wanted from this, the story tells itself but getting the tone and setting right is what really could have failed this film and didn’t. My favourite scene would have to be the battle to take that new mountain for the dwarfs, can’t really go into too much detail without spoiling the story but that my favourite scene, just hope something from the next films blows me away.