I really hope people don’t crucify me for saying this was not my favourite film of 2012 or close. This film had problems that I will discuss within the review. The film was very good though in its first half and I really enjoyed the Hollywood scenes. The acting was also very good for the most part and I loved John Goodman and Alan Arkin. I didn’t think Ben Affleck was all that great as an actor and as the director he did something that I refuse to look past because it keeps happening in Hollywood. America doesn’t solve every problem by themselves, yet in films about history its “‘merica great and everyone else is pussies!” I did five minutes of research and instantly found flaws in this film historical portrayal.

Based on true events, Argo chronicles the life-or-death covert operation to rescue six Americans, which unfolded behind the scenes of the Iran hostage crisis-the truth of which was unknown by the public for decades. On November 4, 1979, as the Iranian revolution reaches its boiling point, militants storm the U.S. embassy in Tehran, taking 52 Americans hostage. But, in the midst of the chaos, six Americans manage to slip away and find refuge in the home of the Canadian ambassador. Knowing it is only a matter of time before the six are found out and likely killed, a CIA “exfiltration” specialist named Tony Mendez (Ben Affleck) comes up with a risky plan to get them safely out of the country. A plan so incredible, it could only happen in the movies. 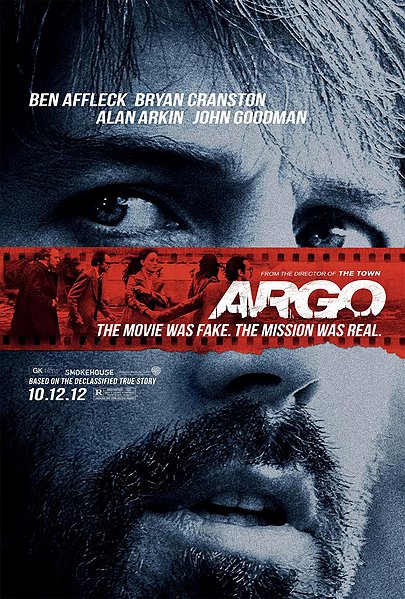 My problem with the story of this film is that it was already great in its factual self, but then they decided to add stuff and lie constantly just to add more thrill and if you can’t make a hostage situation thrilling without lies you’re not very good at this. But this is just the last half of the film, the first half is brilliant with the attack on the American embassy having some great performances and from inside the building was really convincing. The whole Hollywood part of the film was fantastic, funny, good acting and really entertaining dialogue. This of course prompting many quotes of this line “Argo Fuck Yourself”. Overall the acting was very good but I did find that whilst the hostages escaped thier characters became boring and I couldn’t care less if they lived, which seems like a problem when that should be the whole point of a hostage film, Might just be me but I really wouldn’t have cared if the films characters died.

Claiming that the New Zealand and British diplomats had turned away the American refugees in Tehran is utter bullshit! A diplomat from New Zealand drove the refugees to the airport and they planned for them to move if found out at the Canadian house. The refugees initially stayed at a British house before moving to the Canadians after the Iranian police started acting suspicious around the house. Why do American films about any period of history make their allies look like fools and cowards? It’s massively insulting and I am shocked that more people didn’t complain about this. Anyway the style and sound was good and the visuals were excellent considering they didn’t film in Iran, I wonder why they wouldn’t be aloud?

The best reviews I found would be these “Surprisingly enjoyable, given that you may have little prior commitment to this story and only mildly like Affleck” David Sexton. “The only reason to watch Argo is because it’s heavily padded, and while it works pretty well regardless, I wouldn’t hold that up as an example of high quality filmmaking” William Bibbiani. “Argo may be a good film that was just viewed by someone who isn’t its target audience, but in the meantime feels like another Ben Affleck related project that’s being over praised because of who’s attached to it and its bureaucratic subject matter” Chris Sawin.

My favourite scene would have to be anything in Hollywood, very funny and totally enjoyable. Felt like a different film and I liked the characters. Great performances from Alan Arkin and John Goodman best thing in this film.