Not what I was expecting at all. The first of big science fiction films coming out this spring and it was surprising treat both in its original story and breath taking visuals. If you have seen the trailer and made your mind up think again because it really goes in different directions and I hope everyone goes out to give it a go. The acting was very good, the characters were good and the dialogue was good. It may not be for everyone but I struggle to find any complaints and have plenty to compliment as you will find as you read on. I would recommend the IMAX as it’s a great film with eye popping visuals. There will be a spoiler section but other than that this is spoiler free so no need to worry. Leave any comments below I look forward to hearing everyone’s views.

Jack Harper (Cruise) serves as a security repairmen stationed on an evacuated Earth. Part of a massive operation to extract vital resources after decades of war with a terrifying alien threat who still scavenges what’s left of our planet, Jack’s mission is almost complete. In a matter of two weeks, he will join the remaining survivors on a lunar colony far from the war-torn world he has long called home. Living in and patrolling the breathtaking skies from thousands of feet above, Jack’s soaring existence is brought crashing down after he rescues a beautiful stranger from a downed spacecraft. Drawn to Jack through a connection that transcends logic, her arrival triggers a chain of events that forces him to question everything he thought he knew. 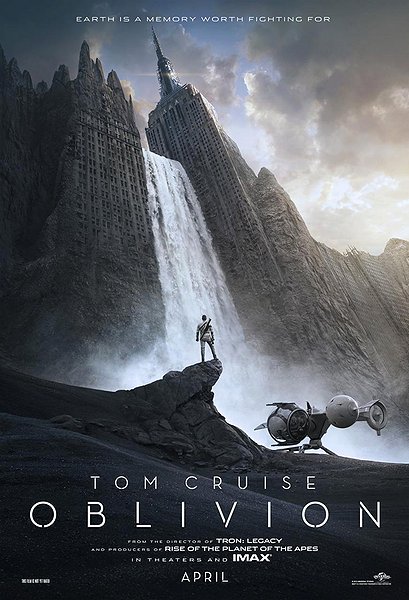 The story in this film is far from what I had guessed from the trailer, and I love that I didn’t know what was coming. The story is very original and based off of Kosinski’s own graphic novel which I thought was really fun creation. I have a spoiler section at the end for the story in more detail but I will say this, if you want more original films to come out then start watching them when they come out like this film. It pays homage to all of those science fiction films of the 1970’s so if you like them then please check it out. The acting was very good, with some great performances from all around. The characters and dialogue wasn’t brilliant but was still good and even couple of times made me laugh so judge it for yourselves. Also Jaime Lannister off Game of Thrones is in this. Who knew?

The science fiction elements of the film are great. I have heard complaints of it being confusing which makes no sense because it explains everything by the end of the film, so ever they are idiots or walked out of the film 30 minutes before the end. The film stumbles onto many classic science fiction themes, aliens, robots, apocalypse, future tech and weapons. It explores them all in a unique way and you just don’t see it coming. Half way through this film I had five theories as to what was going on turns out in the end it was a combination of two which I thought was brilliant and kept my nerdy brain on edge. I really like Kosinski’s style of gritty but clean which just works in this film, massive contrasts between the styles of the end of the world. The film also has brilliant music and sound effects that will beat your heart into submission at the IMAX (Watch out Mike).

I have a theory that Kosinski grew up in one of those bubbles as a child. The man loves clean plastic and beautiful sheets of light. But unlike his previous film Tron Legacy he also had to show a destroyed and crippled earth which requires much more dirt, rubble and moss to seem realistic and it works. I believe it was filmed on location in Iceland and they picked a great location because it is both grey and end of the world looking whilst also having beautiful landscapes and features to CGI over. The drones look amazing as well as Cruises plane, if you liked those Tron dog fights then you will love this because it’s bigger better and insanely bright which is normally the enemy of CGI but works with Kosinski’s style visual. Lastly on the visuals its worth going to IMAX, I did and like the few films before it I found it worth the price. Screw 3D! Go IMAX! 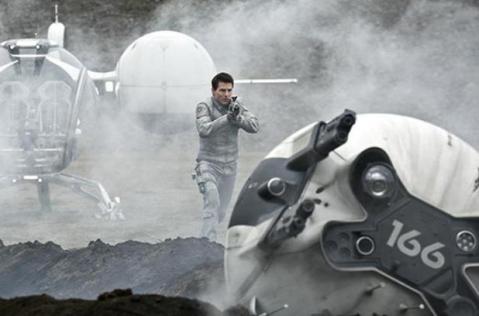 Half way through this film I had 5 theories as to what the hell was really going on. If you read this section and haven’t seen the film go back because the reveals are what make it great, GO BACK. Theory one: The aliens where actually just a different faction of humans and the ones Cruise was working for where the bad guys, theory one wrong. Theory two: The commander and Cruise’s partner where androids and they were annihilating the humans, theory two partly right. Theory three: Cruise and his partner were clones being used by aliens to hunt other humans, again partly right. Theory four: We destroyed the earth on purpose and a new power struggle wanted to set up a totalitarian regime, wrong. Theory five: The aliens where actually the good guys but humanity tried to destroy them with nukes and ruined the earth but this was hidden from the people, also wrong. Interestingly it was actually a mix of both two and three which is brilliant and I hope you enjoy the guessing game during the film.

The best reviews I found would be these “Directed with pace-driven efficiency by Joseph Kosinski (who did Tron: Legacy, but don’t hold that against him), the film does indulge some sci-fi movie standards but is lifted well above the pack by its “what the?” plot turns” Jim Schembri. “It isn’t by any means a game changer, but it has the performances, the story and especially the look to make a trip to the cinema worth it” Matthew Pejkovic. “Earth may be a radioactive wasteland, all its cities erased from the planet, but it’s a bright, sunny kind of postapocalyptic hellscape… [It’s] postcard-pretty — greetings from afterscape Earth! — in a strikingly original sci-fi way” MaryAnn Johanson. “Reminiscent of a dozen or so genre classics, it’s like Tom Cruise playing WALL-E by way of Tron: Legacy” Stephen Carty. “Rich with ideas, and driven by extraordinary visuals, the occasionally confusing but deeply rewarding ‘Oblivion’ is a top-flight slice of sci-fi” Erin Free.

My favourite scene would have to be this giant chase scene with Tom Cruise in his plane trying to escape three drones. Its incredible fast paced and thrilling to watch, and the visuals where stunning! This film has a lot of scenes that make a trip to the IMAX worthy of your time and money.