Why didn’t I see this film sooner! The Raid 2 is just excellent, not only a great action martial arts film but a really well made gangster movie. The story was really clever and expanded a lot from the first film, we go right into the underground of the city and into the two crime families who run it. The visuals and choreography are masterful! We have car chases, great martial arts battles, big gun fights and all for under $5M. Gareth Evans who is a Brit or Welsh to be more specific. I did not see that coming, regardless he did an excellent job and I hope he gets to do a third, or just a lot more films. I’ll go into much more detail below but for now bookmark this if you are waiting to see the film, leave any comments below, if you have seen the film then check out the spoiler sections and I will look forward to hearing everyone’s thoughts.

“You apologize! In their language, in our land! Where is your honor?”

His family at risk, Rama has only one choice to protect his infant son and wife: He must go undercover to enter the criminal underworld himself and climb through the hierarchy of competing forces until it leads him to the corrupt politicians and police pulling the strings at the top of the heap. And so Rama begins a new odyssey of violence, a journey that will force him to set aside his own life and history and take on a new identity as the violent offender “Yuda.” In prison he must gain the confidence of Uco – the son of a prominent gang kingpin – to join the gang himself, laying his own life on the line in a desperate all-or-nothing gambit to bring the whole rotten enterprise to an end. 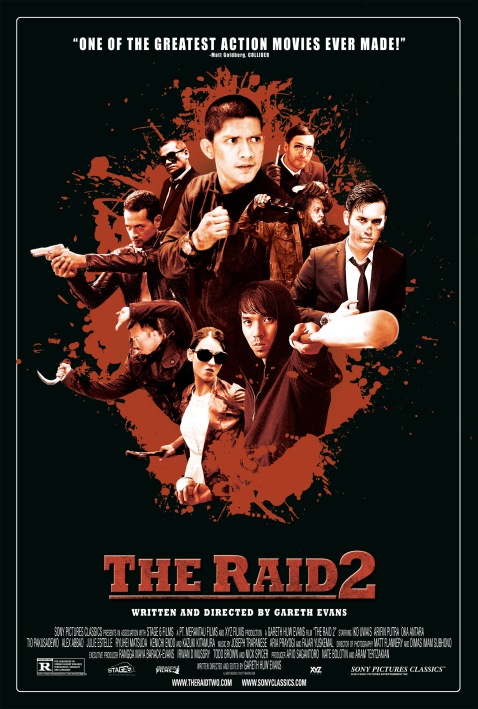 The story of The Raid 2 is of a man who knows right and wrong like black and white but who gets thrown into a world where everyone sees grey. It’s far more intelligent than you’d expect and the characters get really interesting. Iko Uwais who plays the lead Rama is really talented both in his acting and his Martial Arts skills, I really hope he gets more work and I’ll be looking out for this talented fellow. We have other cast members I’ll talk about in the spoiler section.

The visuals are very strong and there are some really stand out moments. The car chase in particular was masterfully filmed and so action packed, felt like a proper action blockbuster. The fight in the kitchen alone was one of the best martial arts fights I have ever seen a film. This film also boasted a lot of set locations, we have prisons, trains, fancy hotels, car chases through streets. I mean how can you get all that and more for less $5M? They even cut scenes. Here’s an excellent scene that was cut to save time, The films 150 minutes long.

Seriously guys turn away now to avoid spoilers. In the last scene Gareth Evans comes in view of the camera and says that none of this was scripted and that he just followed some criminals around Indonesia. I told you not to read this section. There is a lot to talk about here so I’ll keep it brief and talk more in the comments. There are few films were I especially miss characters who die or wish they could have survived, but this film had two! Yahan Ruhian who plays Prakoso the one with the machete, boy did they build up his background and he thought so well! Wish he saw his son at least once. And Oka Antara who plays Eka the secret undercover cop who couldn’t go back to the police and so is stuck in the criminal underworld, wow he really saved the day and had one of the best action scenes with that car chase to save Rama. Also what happened in the end, is that a cliff-hanger? Is he going to be killed? Does he just walk away? Where is the Raid 3? 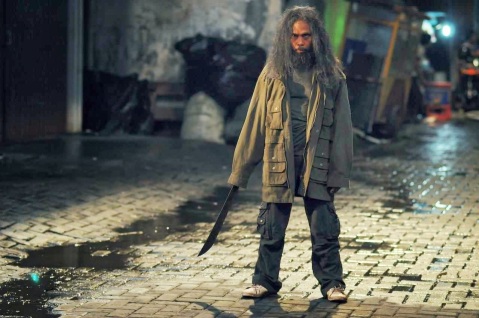 The best reviews I found would be these:

“I commend Evans for trying something different with this sequel; it’s nothing if not ambitious. The film’s ambition might blunt the action sequences through ubiquity and a bloated, clichéd storyline, but it pays dividends in those heady final minutes which exceed anything found in The Raid. Recommended viewing; if for no other reason than you’re unlikely to see an action film this well filmed and choreographed again anytime soon.” Cc Pop Culture. Full Review

“If you’re ready to see hard-hitting cinema that goes for the throat without any apologies, you should watch these films. All other fans too fragile and timid and too used to sanitized, water-down filmmaking, the door’s over there.” Express Elevator To Hell. Full Review

“Topping one of the most jaw-dropping action films in years is an unenviable challenge, but Gareth Evans has done just that with this savage and scintillating follow-up. Evans has indicated a third and final chapter is on the way and for that we should count ourselves lucky – action movies simply do not come any better than this.” Three Rows Back. Full Review

“A more sprawling film that the original but still just as fast-paced, violent and action packed with high quality fight choreography that truly impressed. A bit too long and some characters were a bit flimsy but this was still a very enjoyable movie.” It’s Latin For Cookies. Full Review

My favourite scene has to be the kitchen fight. The Kitchen fight was glorious! There should be an award for best fight scene of the year and so far that wins with ease.